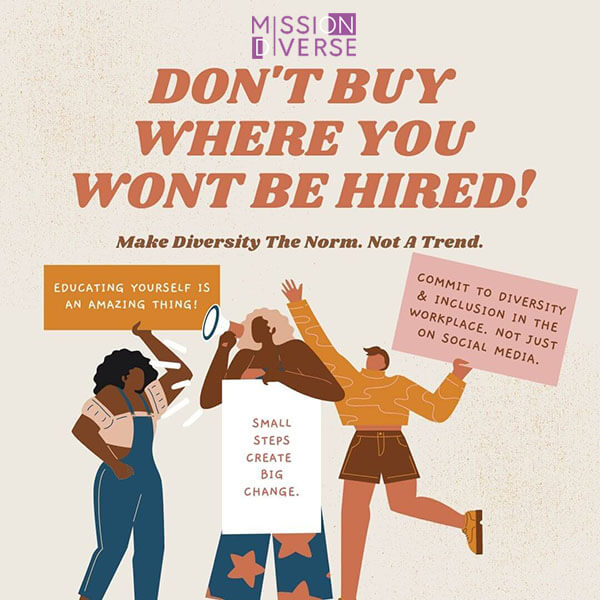 Believe it or not, addressing and acting upon discrimination and racism in the workplace is not difficult. The real problem is people and organisations that don’t know how to, or don’t care to address workplace racism and discrimination.

NEWS FLASH! Organisations that make these common and generic statements are normally the ones that are NOT committed to real diverse and inclusive progress.

We have also found organisations who make these generic and disingenuous statements don’t often celebrate, embrace and encourage workplace diversity. Instead, they react to societal changes which may affect their financial viability. As a result, a “drive” for diversity and inclusion are really token gestures to appear more favourable to consumers.

A prime example of this is the murder of George Floyd, an unarmed black man who was murdered by a white police officer during the 2020 pandemic, which went viral worldwide.

In response, consumers across the world took a visual, audible, and financial stance against racism and racial inequalities towards people from black and minority ethnic backgrounds. Primarily refusing to shop or spend money with organisations that are not diverse or inclusive.

Conveniently and shortly thereafter, companies made the declaration of being “committed to improving diversity and inclusion” in 2020 and 2021.

If you, your team or your company have opted to “encourage” diverse and inclusive change through the mantra or ethos of “being committed to improving diversity and inclusion…”. Here’s a quick litmus test for you to try out at work…

Email or speak to 1 member of staff from 3 different departments at work who you’ve not engaged with before. Then ask them the following question:

“Do you know what we’re doing in the company to improve diversity and inclusivity?”

Here’s a question to ask yourself…

If the employees you’ve spoken to are unable to explain or communicate how your organisation is “committed to improving diversity and inclusion”. How can this commitment be fulfilled?

What Your Company Means Is… Let’s Be Numerically Diverse!

Although most companies don’t want to admit it, what they often mean by “We’re committed to improving diversity and inclusion…” is:

“We’ve gone on a recruitment drive and hired people from diverse backgrounds”. I.e., Corporate spin for “we’ve hired more people from underrepresented backgrounds to increase our diversity numbers”. What there is no mention of in these hires is, these are entry level or voluntary positions with no real path for career progression. They are simply there to boost company diversity numbers.

Actions like this taken by organisations don’t do anything to improve diversity, other than to appear “numerically diverse”. As well as providing a false sense of security, activity and action towards diversity and inclusion. These poorly thought-out reactions to societal inequalities by organisations are often token gestures that primarily prevent and blind companies to imbedding real diverse and inclusive change.

England Football Euro’s 2021 Shows Companies Are Only Ever Reactive, Not Active or Responsive.

At Mission Diverse, our Diversity and Inclusion consultants focus heavily on providing support services, advice and training to help you imbed and advance diverse and inclusive change throughout your organisation, without thinking about numerically diversity. Once you understand the reasons why numerical diversity is one of the biggest blind spots an organisation will have, you like many companies we have worked with will start to think about diversity and inclusion in a completely different way. You will also start to notice real change in attitudes, processes, responses and activities amongst stakeholders.

Another recent example of companies preaching about diversity and inclusion but not acting upon these pledges was shown during the 2021 Euro Football Finals between England and Italy. Whereby players; Saka, Sancho and Rashford missed penalties to see Italy take home the title. Although it is very much a common and historic scene throughout England’s footballing performances on the world stage to lose games on missed penalties by a white player, these three black players were flooded with online social media racist comments. An example of this is shown below by a Savills employee:

In response to the public backlash, the company, Savills, who employs the individual (at this present moment), responded to the deserved criticisms of hiring a racist by stating the following:

Are You Seeing the Pattern Emerging Here?

Companies like Savills, who refer to being “Committed to diversity and inclusion” often say this as a knee-jerk reaction to overt racism and/or discrimination. It is used as a blanket statement to either wash over racism and discrimination in a public forum, or an excuse not to address it at all. Which is also evident in their lack of diversity in their all-white senior leadership and board level which can be viewed here.

Savills released a statement on the 12th July 2021 highlighting the employee who tweeted racist comments from two different accounts claimed to have been conveniently “hacked” on the 11th July 2021. However, tweets spanning back to 9th March 2021 and earlier also show very clear and obvious racist comments. It seems the Savills employee and Savills as a company believe modern day hackers are well known for getting into random people’s accounts just to type a quick bit of racism and then leave the original owner with full access.

It’s also important that organisations understand that thanks to the internet and social media, consumers can make informed decisions on how a company is behaving relative to what they have pledged. Gone are the days of empty consumer promises. It doesn’t hold water in 2021, let alone in years to come.

How to Really Begin to Commit to Diversity & Inclusion

Remember that improving diversity and inclusion is not an overnight activity. It can take months, if not years to really change a culture and mindset. Even though it is proven that more diverse organisations see exponentially greater results in employee productivity, company revenue and consumer support, it should be something you as an organisation want to do, not a reactionary attempt for positive PR and sales.

If you and your organisation are not wanting to be THAT company who “commit to diversity and inclusion” but want to actively create change to your workplace culture… Get in touch with Mission Diverse today.

One thought on “Companies: We’re“Committed to diversity and inclusion”. NEWS FLASH… You’re not!”